Working with human brain integration of spatial and temporal processes I below try to approach this very, very complex issues from perspective on space and time. The goal is to develop a practical approach for biopsychosocial-cultural medicine interventions where placebo and integrated biofeedback have important positions not much earlier realized and discussed. This is based on 2o years clinical as well as theoretical work.

Below I will discuss this more in detail but first some others thinking – to be worked and integrated/included below in my own text;

Eyes more important than legs to get up on land

It was not the limbs that were the prerequisite for vertebrate development from aquatic to terrestrial species. What was required was better eye.

The first vertebrates which seriously left the water and started living on land occurred for about 385 million years ago. An U.S. research team has studied fossils and done computer simulations of vertebrate evolution to find out more about how it happened. The analyses show that there was a very rapid development of their eyes just before the first terrestrial species occurred. Eye size tripled and they moved from the sides to the top – and this was therefore room while the species still lived in water. The scientists believe that an improved approach was the very premise of the step up on land.

– In water, we can only see things in short distance and large eye does not improve vision significantly. But on the land causes big eyes sharp improvement in sight, “said Malcolm MacIver, professor of biomedical engineering at Northwestern university in the United States and one of the researchers behind the study, which is published in PNAS.

The improved vision resulted in the aquatic vertebrates could see those arthropods that have already lived up on the country, such as centipedes, and stretch or jump to reach these prey from the water, a hunting method similar to crocodiles. Terrestrial insects were an untapped and abundant resource – and when vertebrates could see and hunt these animals, so began a gradual adaptation to a life on land. Limbs developed, but this happened after that vision had been refined.

The improved sight has also contributed to the development of thinking skills, according to the researchers.

“When you can see the enemies and prey from a distance, there are prerequisites for making trade-offs and to choose between different documents, unlike when you just see them up close and have no other option than to react at lightning speed,” said Lars Schmitz, paleontologist and associate professor at Claremont McKenna, Pitzer, and Scripps colleges, which also participated in the study.

It has been proposed that the living conditions in the seas worsened and that there was therefore some vertebrates were forced to adapt to a life on land. It may have been about increasing temperature, low oxygen level, or perhaps for the high salinity. The theory that is now presented by the American research team – it was the most abundant resources on the country that drew up vertebrates from the water – have also been proposed in the past. But that this required a quick and comprehensive evolution of eyes is a completely new idea, which is likely to be debated extensively in the future.

BvS Text-> A conclusion of the above is that stereo developed perspectives in general improved the brain capacity e.g. to observe and estimate depth enabling to estimate movements in tree-dimensional space. Which in turn open up more specifically for time dimension evolution which over time resulted in the human part of our brain, the temporal, verbal part.

To be able to visualize perspective was probably a critical part of evolution of our brain e.g. while a kind of space anticipation would increase survival substantially. When gradually temporal brain was developed organisms not only got a way to communicate more complex but also could increase its anticipatory capacity rapidly. Probably anticipation of near future events must be a revolution although anticipator spatial capacity was a capacity already evolved.

When we try to understand, the extreme complexity characterized by human brain information elaboration between its very different spatial and temporal code system we need to realize that visual (and also audio-stereo) spatial information processing was “caring” a kind of temporal options which then in human temporal brain was extremely rapid developed probably related to the enormous advantage of “having access” to both spatial and temporal information processing “tools”.

We examine the hypothesis that consciousness can be understood as a state of matter, “perceptronium”, with distinctive information processing abilities. We explore five basic principles that may distinguish conscious matter from other physical systems such as solids, liquids and gases: the information, integration, independence, dynamics and utility principles. If such principles can identify conscious entities, then they can help solve the quantum factorization problem: why do conscious observers like us perceive the particular Hilbert space factorization corresponding to classical space (rather than Fourier space, say), and more generally, why do we perceive the world around us as a dynamic hierarchy of objects that are strongly integrated and relatively independent? Tensor factorization of matrices is found to play a central role, and our technical results include a theorem about Hamiltonian separability (defined using Hilbert-Schmidt superoperators) being maximized in the energy eigenbasis. Our approach generalizes Giulio Tononi’s integrated information framework* for neural-network-based consciousness to arbitrary quantum systems, and we find interesting links to error-correcting codes, condensed matter criticality, and the Quantum Darwinism program, as well as an interesting connection between the emergence of consciousness and the emergence of time.

* http://www.scholarpedia.org/article/Integrated_information_theory Integrated information theory (IIT) attempts to identify the essential properties of consciousness (axioms) and, from there, infers the properties of physical systems that can account for it (postulates). Based on the postulates, it permits in principle to derive, for any particular system of elements in a state, whether it has consciousness, how much, and which particular experience it is having. IIT offers a parsimonious explanation for empirical evidence, makes testable predictions, and permits inferences and extrapolations. (BvS-> see PDF printout).

Essayes in Evolution and genetics … Editors Hecht and Steere 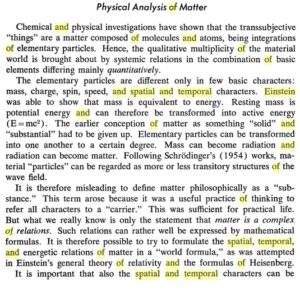 https://www.ncbi.nlm.nih.gov/pmc/articles/PMC4141622/
Humans have long pondered the nature of their mind/brain and, particularly why its capacities for reasoning, communication and abstract thought are far superior to other species, including closely related anthropoids. This article considers superior pattern processing (SPP) as the fundamental basis of most, if not all, unique features of the human brain including intelligence, language, imagination, invention, and the belief in imaginary entities such as ghosts and gods. SPP involves the electrochemical, neuronal network-based, encoding, integration, and transfer to other individuals of perceived or mentally-fabricated patterns. During human evolution, pattern processing capabilities became increasingly sophisticated as the result of expansion of the cerebral cortex, particularly the prefrontal cortex and regions involved in processing of images. Specific patterns, real or imagined, are reinforced by emotional experiences, indoctrination and even psychedelic drugs. Impaired or dysregulated SPP is fundamental to cognitive and psychiatric disorders. A broader understanding of SPP mechanisms, and their roles in normal and abnormal function of the human brain, may enable the development of interventions that reduce irrational decisions and destructive behaviors.