(www.placego.se is forward here also)
(Most about placebo and cancer at this website will be public first in the falls 2023 when also scientific/clinical (ideographic) case data will be available – some is and will be quite complex but I will at www.stressmedicin.se write in Swedish more easy – I hope – info about cancer; what it is, how it is developed in general, how we ourselves can do very much using a biopsychosocial toolbox – requiring education and guidance especially while each individual at best tailor her/his own approach motivating self-care work and also often a felling of “I can do very much myself” and more confidence instead of helplessness – which is easy to adapt )

Medicine is not based on absolut knowledge (see links below) but on knowledge based paradigms, something not often brought in the light!

First, the below is a generalists way of creatively approach perhaps an impossible but perhaps one of the most important possibilities in medicine – challenging medicine since ever! It is based on a biopsychosocial medicine paradigm, which is a try to connect more closely real world with different fields of medicine – something hardly have represented priority in todays reductionstic medicine paradigm, while not possible to approach with reductionistic Technology and Methodology, but beginning with systems integrating biopsychosocial medicine paradigm.
So a warning, the below may not be what you expect and it is not what is discussed yet in mainstream medicine!

Here are many years of thinking on placebo as well as nocebo (the opposite) – but for the first time partly in public discussed. As my thinking continue to develop day by day traditional publication will be possible first 2019 while I do have some case data illustrating the main idea – a prototypic biopsychosocial placebo (see below) toolbox. Text so far will overlap as well as all be working drafts so be careful while reading – also while by dyslexia may complicates. Below you find some of my thinking!

Adding to the above:
1. Although our knowledge is very limited especially within the fields of placebo-expressions, we need try to distinguish between just assumed psycho-emotional expectation effects and such those include physiological/biological consequences.

2. We work after the hypothesis that there is a direct or indirect interplay between dynamic placebo-nocebo stress and relaxed autonomic nervous systems behaviors as well as other psychophysiological and neurobiological behaviors – as the picture below suggests 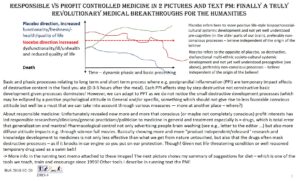 3. Using the concept placebo in the old way mainly referring to believes (spatial, Limbic activities/processing, preferably not direct subjected to conscious observations) is addressed in a specific tool which is a prototypic nontraditional hypnosis/self-hypnosis strategy. Also, assuming that this kind of placebo is working in the “dark”, in terms of not easily measurable with reductionistic methodology, interacting in a synergy way.

The Krebozen example (see that subpage) is one related to external substance but this is assumed to be anything, e.g. for myself an assumed integration between increased evidence on positive influence of Turmeric on dysfunctional cancer cell behaviors as well as my not-intentionell (I suppose) believe that it works. It cannot be excluded that such kind of rational and irrational synergies are operation all the time – in a not measurable and understandable way. If we assume this, then we invest efforts in all aspects of the above which is not (a) destructive in any known/assumed way and (b) do not prevent use of any kind of consensus interventions with the regard to the discussion above!

Expectation is also discussed as related to (traditional) placebo effects, which is also in my redefinition which actually is a broadening of the concept. Often expectations is regarded as internalized induction and if so, it is important but, as e.g. in the Krebozen case dependent on external factors. One of my reasons for since 1986 work out of the concept “patient as an educated, competent resource and coworker in own rehab” (competent refers to what is reasonable!) is that learning/understanding/.. of present knowledge and how it can be personalized used is assumed to have influence on such processes in placebo-like terms but also motivating patients to really do what need to be done of them concerning diet, exercise, (learned/trained and biofeedback assisted) breathing, and the other tools in the toolbox.

All parts of the health care chain is more or less – but still -of relevance for treatment effects! Even if medicinal science har not realt much with the placebo conceptualization during the years some work has been done and now a novel interests is very welcome by many including me! From the first encounter including administrators and all those communicating with a patient is a part of the development toward a placebo effect or a nocebo effects. One of many problems is that ” silent healer” (http://postprint.nivel.nl/PPpp3914.pdf) which we at last more and more try to understand and use, while do not do any harm! At present we begin to understand that Limbic precognitive spatial systems is involved including internalization processes but also individuals own construct systems which in different ways can be subjected to reconsolidation/reconstruction. … more is to come 2019 when I publish the biopsychosocial medicine toolbox.

For an example of a, for many presumably impossible, case see about the Krebozen case see http://biopsychosocialmedicine.com/projects/rd-international-projects-2/placebo-rd/the-1957-placebo-case-the-krebozen-story/

Science is not based on absolutes–Richard Dawkins proves that