In clinical psychophysiological work we often use individual´s personal memories as one of the tools for increasing active relaxation capacities. As communication with old brain (spatial “language”), preferably limbic system, finding out (and validated in psychophysiological data) images/memories that evoke positive emotions (and lower, e.g. sympathetic activity) is facilitating biopsychosocial stress coping. Building a “cluster” of identified (or training to develop such) constructive images, together with identified (with RSA, etCO2 and FT) effective breathing, movement as well as verbalization of the process has been one of our basic educated and personalized exercise behavioral strategies.

Below is one example shown in a hypotension patient, where we can follow the process/flow of the RSA-pattern, which increase in functionality reaching a perfect pattern, FT increase more than 5 C in very short time), blood volume pulse, and also CO2 pattern change substantially. 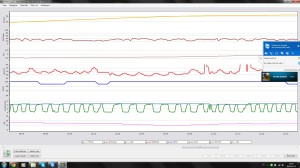 The subject was asked to focus on a positive memory. In this case, she had used it earlier while she had experienced and noticed she could relax more easy – so this was already “her own tool”. This is something we often observe, that is, that individual often has capacities they are aware of or, mostly, are not aware of. Given they can see and understand their already existing capacity has pronounced effects on motivation and results of their peronal use of their psychophysiological toolbox.

A clinical interpretation based on many experiences is that the subjects image had a pronounced effect especially on sympathetic nervous systems activity as well as on the autonomic nervous systems oscillation – indicated resulting in a evident relaxation and well being effect. The day before, the subject had trained phased breathing (by herself, 6 breath per minutes) for quite a long time 15-20 minutes and after this felt dizziness and moderately bad in general. This state stayed until data was collected (above) the day after. I asked her to only think about a positive memory and nothing else. Above is what happened and direct she felt well which stayed until report two days later.

Clinically we are very careful how to use manipulations of individuals breathing behaviors while this influence basic cell metabolism, cardiovascular systems as well as autonomic nervous system – indeed nothing to “play” with. Normally we never use hyperventilation while this can be hazardous, especially in not clinical settings. Symptoms as above is very common and can occur also in different kind of yoga and the like promoting different, more or less, severe kind of sustained emotional – psychophysiological problems according to my own and colleagues experiences.

But data above is here primary shown to illustrate how strong effect an image can have and that it can be partly measured. Using our knowledge about state dependent learning, we use such “forces” together with other strategies to increased the efficacy of building up a trigger cluster, which over time become habitual – an automatic, silent platform for individuals´ every days serene behaviors. Something we can regard as an investment in future health .

Many subjects “have” such capacities without knowing it. Others need to do much practice. Usually, I first go “fishing” using parameters above to see what memories are “hot” positive. “A bite” is observed by fast changes – also in subjective reported feelings and blood pressure – also diastolic, dependent on how much of the ANS is involved, when it concerns dysfunctional blood pressure.

In ADHD children we have observed pronounced effects in RSA and FT as well as in activity (hyperactivity lowered or disappeared). To note is that once this happens, it is a sign, but often then very much of operational conditioning work is needed. We argue that FT-biofeedback (indicating SNS activity changes) is mostly preferably as modality. Another observation is that some subjects get negative results from biofeedback on-line (part of the independent variable) and need first train off-line (part of dependent variable) until they can do what is understood with the concept of biofeedback.

The largest change due to images in FT is from 20,3 to 34,5 C during 8 minutes FT-biofeedback in a 52 years old women, (measured 1991), suffering from severe cardiac problems, who from that session move from not able to relax to pronounced capacity to relax. The most pronounced changes in FT so far, but here the start level is critical and most subjects have not such a low base line! Reaching substantial results in only one session is not very seldom (more is to come about this at this web site)

To be noted is that we always use group education so subjects know the “what, why, how …” etc before they are using their tool box. I have written more about this in “The patient as an educated, competent resource co-worker in healthcare” (not published by available via mail to info@stressmedicin.se).

Concluding remarks
Above concerns mainly positive effects of images but we see the very opposites also. When patients are verbalizing their problems, often fast, pronounced changes occurs which show how fast also negative reactivity/emotions happens in individuals (and their data). Explaining, while showing, such changes afterwards for patients is mostly very meaningful – in many ways , where one is that once they see their emotions have “a visible face – expression”, this makes them not so scaring as when they earlier were “dark and mysterious”. Having “a anxiety visible face” means also they can see how they can follow how they change them. I will later on at this web site also discuss this and show data but right now I conclude this discussion with a provoking thought;

The above awake perhaps in some thoughts about the concept of placebo and noncebo (the opposite to placebo). When we talk about placebo (independent variables) this related to very fast changes (in dependent variables) due to causes not well understood – “unknown factors”. But perhaps it is not that “unknown factors” while perhaps we are looking at the wrong place for  increase our understanding .

“Human organizations are living systems and should be analyzed accordingly. The fact that it faces us with the task of analyzing forbiddingly complex environmental interactions gives us no more of an excuse to isolate organizations conceptually than the proverbial drunk had when searching for his lost watch under the street lamp because there was plenty of light when he know he had lost it in the dark alley” Emery, F.E. (1969). Systems Thinking. Perguin Books Ltd, Harmondsowrth, Middlesex; England, page 8

If we assume that placebo-like processes also occurs more slow they are not that spectacular and probably not notice as a possible placebo effect – mostly this is called “spontaneous recovery” – a concept expressing “not know causes” also. And the same might also be the case with noncebo!

I will return to the above placebo discussions later on!